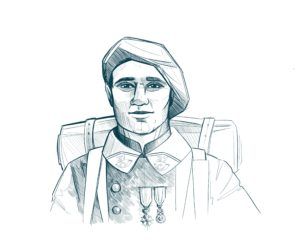 1918. The war is over, with 10 million dead and 20 million wounded. The nation will never forget them. In 1925, at the Hôtel des Invalides, two women decided to make this their cause!

Charlotte Malleterre, daughter of the commandant of the Hôtel National des Invalides, and Suzanne Leenhardt, a nurse, launch a workshop to restore meaning and perspective to shattered lives. Residents make, for sale, cornflowers, out of blue cloth. The cornflower… the only flower seen in the desolation of the trenches. The blue… the blue of the flag and the uniforms… the blue of the sky that sometimes gave hope.

Even today, this work of national support continues unchanged. It is immense! The mission of solidarity is ever present and covers a broad spectrum: support for victims of war and terrorism, for wards of the nation and the elderly… offering material and psychological support. Financing of projects such as those for injured soldiers competing in high level sport. Adding a mission of remembrance for those who gave their all. This mission involves cultural and educational projects and events.

The Bleuet de France (Cornflower of France) is part of the National Office for Veterans and Victims of War. It has a network of 105 services in France and overseas. Each year, on 8 May and 11 November, thousands of volunteers call on the generosity of passers-by. As Bleuet de France is recognised as being of public usefulness, donations are tax-free. It is also possible to help the Bleuet de France in other ways, by giving a little of your time to participate in collections. 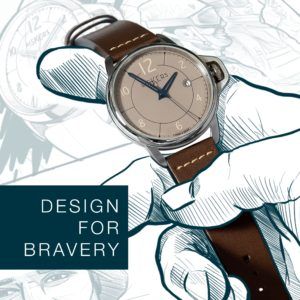 The Riskers Prolog 1 model celebrates an exceptional soldier from the First World War. It seemed evident to us that a share of sales should go to support this great cause!