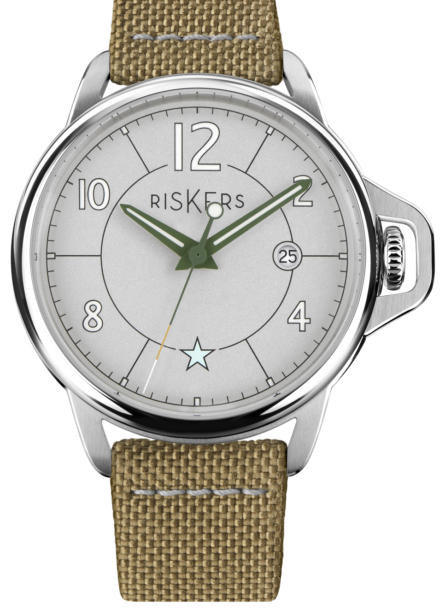 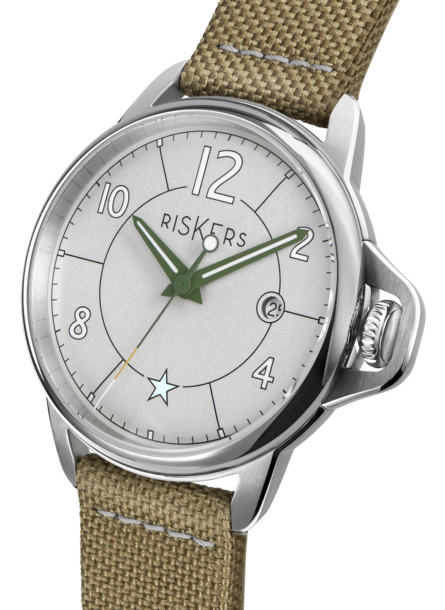 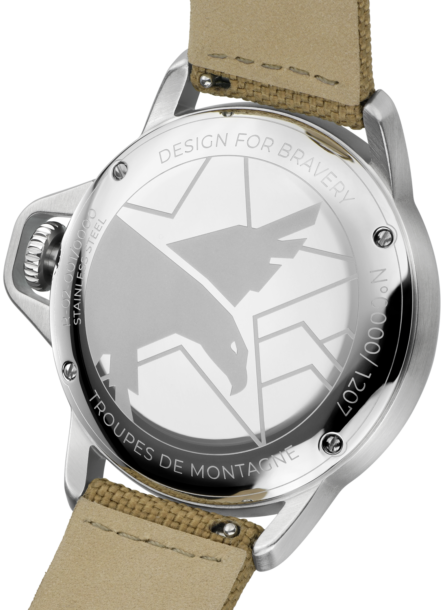 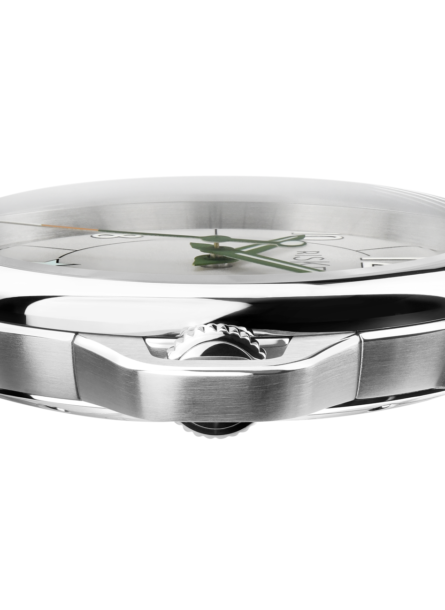 The Chapter 2 is the result of an exciting collaboration between Riskers and a military brigade unlike any other: les “Troupes de Montagne” (Mountain Troops).

Its design embodies strong identity codes, integrating mineral and vegetable elements in a sober aesthetic directly inspired by the mountains and their fighters. 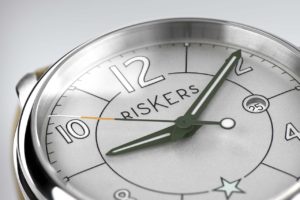 The sandblasted dial recalls the roughness of rock; the eye-catching, glacier-blue star, the North Star, or Scouts’ star. It symbolizes extraordinary men and women.

The tundra  green of the hour and minute hands, the sand of the seconds hand and the bracelet, evoke the camouflage outfits of the Alpine troops. The sandy colour speaks of desert mountain rocks.

The caseback is stamped with the Mountain Troops’ logo: an eagle’s head on a background of stars and peaks. The series stops at 1027. 27 being the number of this daring brigade!

The cause supported by this beautiful quartz model is «Entraide Montagne», which supports the families of these anonymous heroes.

Created in 1888 to defend the Alpine border, the French Mountain Troops were to become closely integrated into their alpine, human and physical surroundings. Pioneers in the collective practice of mountain techniques, the mountain soldiers made a major contribution to the introduction of skiing and the development of its practice in France at the beginning of the 20th century. 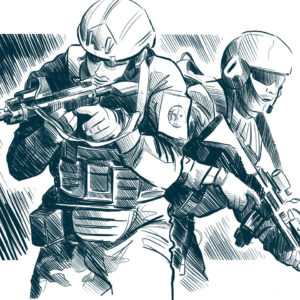 Shock troops during the First World War, they were undefeated in their defence of the Alps in 1940 and continued the struggle by mentoring the Alpine Resistance. Since the end of the Cold War, mountain soldiers have been deployed in many military operations: in the mountains (Bosnia, Afghanistan), in other difficult terrains (Central Africa, Sahel…), or on national territory (against terrorism, in the fight against illegal gold-panning in French Guiana, against natural disasters…) They stand out for their endurance, their ability to adapt and their strong cohesion.

What of the Mountain Troops today? They are a community of nearly 8,000 men and women, both active and reserve soldiers, who are specialists in mountain and cold weather combat and mindful of the environment in which they live and train.

Riskers and the Mountain Troops, far from operating a superficial association, have decided to go deeper. A new design has been created, respecting both the identity of the brand and that of this prestigious brigade. With the exceptional agreement of the Mountain Troops, Riskers recounts the true stories of these anonymous heroes.

General Givre, why did you choose to join the Riskers adventure?

«A team, united by the tough school of Fine Watchmaking…dynamic, accessible… staying true to their values, they set out on a great and «risky» adventure. It speaks to us and we like it. »

In 2020, «Entraide Montagne» celebrates its 20th anniversary. With its 6000 plus members, this association exists to help mountain soldiers who have been injured in combat or training (prostheses, adapted vehicles, etc.). Their assistance extends to the families of mountain soldiers, wounded or killed in the line of duty (financial assistance, sponsorship of children…).

BE PART OF THE TEAM
& GET ALL THE UPCOMING NEWS