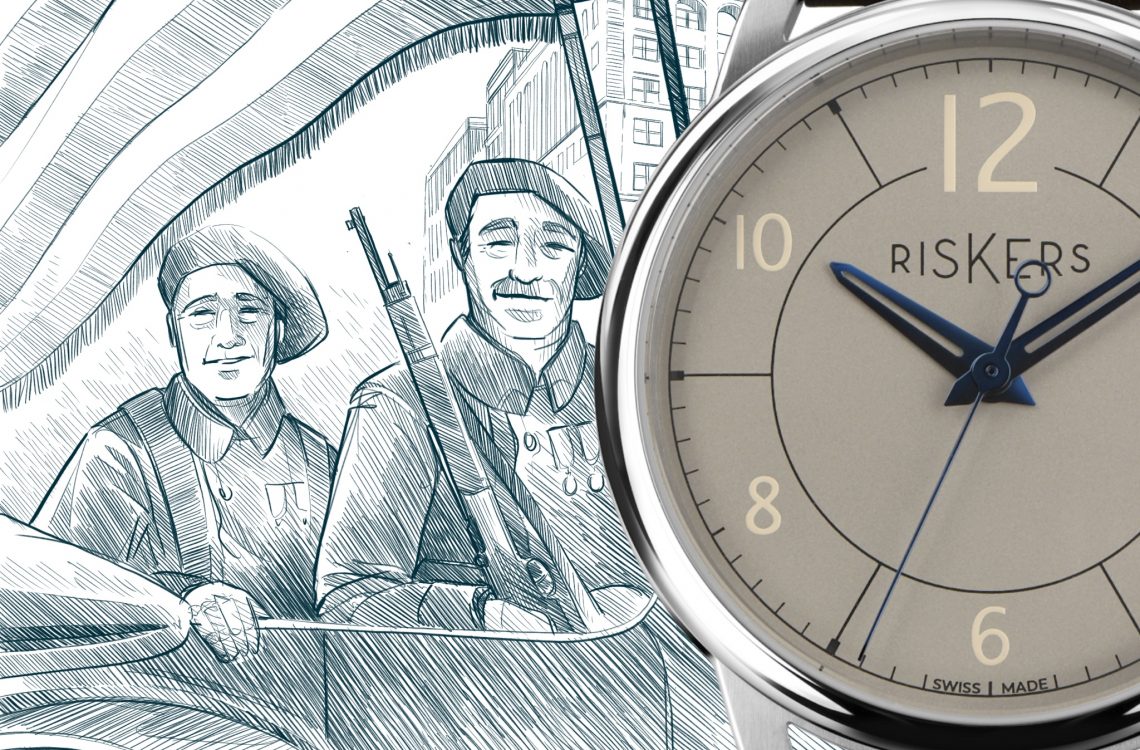 Behind the wheel of her American Six, Judith, the young driver of the American Red Cross, is getting impatient. Discreetly so, as she’s transporting distinguished guests…

Albert, his heavy Lebel rifle in one hand, his haversack in the other, hoists himself up into the convertible. The sun is shining in Washington. He is already too warm in his army issue, midnight-blue jacket, typical attire for the French alpine troops. His two comrades, Henri-Antoine and Charles, get into the back.

The motorcade of about 30 cars, all driven by ambulance drivers, slowly moves out of the barracks at Fort Myer. On board are 100 Alpine soldiers, all with weapons and baggage. Impeccably turned out! On their chests shine military crosses and sometimes the prestigious “Médaille d’Honneur”. They adjust their large alpine berets, known as the “pie”. The “Blue Devils from France” are expected at the White House, by none less than President Wilson! The date is May 13, 1918…

A few months earlier, the 11th BCA are stationed in Flanders. They are just  back from Italy, where, in the middle of winter, they contributed to stopping the Austrian offensive on Monte Tomba.

– Frenchie! Where is the French Corporal? »

– “well, you’re gonna see her for real and even cross over her! The Old Man has appointed you to go to America! Get your gear ready. You’re taking the train tomorrow morning to Lille and then on to the port of Bordeaux. There you’ll meet up with Mountain Troops from other battalions, also designated to this mission…

– ” the telegram says little more than that: a tour of the French army in the big American cities… Lucky you, but you deserve it!

Thus, Albert, Henri Antoine, Charles, Marcel, Roger, Louis, Théophile and dozens of other Mountain Troops, from all sectors of the French Front, will meet up on April 16, 1918 on the deck of the Rochambeau, for a 12-day crossing heading for New York! They don’t know each other, apart from being Alpine soldiers – whom their German adversaries have nicknamed “Blue Devils” because of their fighting spirit and their characteristic dark clothing – but they have all been decorated for bravery with the “Croix de Guerre” and have all been wounded in gunfire , some of them several times. Albert was wounded and gassed four times at St. Albert.

For two months, they will live an adventure as surprising as it is little known. 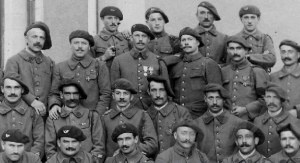 Their mission, devised by the French High Command, is to send a detachment of their best soldiers to tour major American cities, as ambassadors of France in combat, to help promote the Third Liberty Loan. Special envoys from the major American newspapers reporting on the European front, popularized the figure of the “Tommy” and in particular the “Blue Devils” entrusted by General Pershing with the training of his first soldiers to land in France, in 1917: the doughboys of the 1st Infantry Division, the Big Red One who 27 years later would attack Omaha Beach. Young, sporty men, full of joy and superbly equipped but still novices in trench fighting. With the Blue Devils, they quickly learn the business and a mutual admiration is born.

The New Yorkers rush to cheer-on the Blue Devils as they parade, with their long bayonets raised, keeping up a smart pace behind the six buglers. As they pass down Broadway, onto Madison Avenue and City Hall, they shout out and throw roses or cigarettes. Barely two days on American soil and the tone is set: an incredible welcome is reserved for the French soldiers and the fifty or so of Pershing’s soldiers, momentarily liberated from the trenches, who accompany them.

Country folk, workers, teachers… from the Alps, Brittany, Normandy and the four corners of France… people who rarely travel, are suddenly catapulted into another world. A world of giant skyscrapers, gleaming buses and inevitably pretty girls(testimonies are unanimous!).

They want to see the Blue Devils…the “ambassadors” of the Liberty Bond, who are in demand and invited everywhere:

At City Hall they are received by the Mayor; on Wall Street,an ordinary gas mask is auctioned off to a rich banker for $500,000! At Carnegie Hall, at concerts, at baseball games (“Albert, do you understand anything about this game?”)…they meet Charlie Chaplin and the most prominent actresses who turn the heads of these down-to-earth lads. Thomas Edison, who is already working on the first drum set, welcomes them to his workshop  and they leave with a gramophone and a new drum kit.

One night, at Century Grove, they can be found dancing the foxtrot and the One Step with the dancers and backup singers of Midnight Revue. Until late, of course.

And the next day, feeling a little tired, they board a steamboat which drops them off at  West Point. There they receive the great honour of being invited to watch the Cadets marching past. Cadets who are barely younger than the leader of the French detachment: Albert Le Moal. Albert is a 23-year-old lieutenant, always ready with a joke, wounded five times and decorated with the Legion d’Honeur. A lad whose smiling face is adorned with the scar of an enemy bullet.

In the streets of New York, they are accosted by rich and poor; their bus is stopped; they are kissed, offered a good restaurant, rounds of Ginger Ale. One day, a mischievous young New Yorker crushes her chewing gum (“what’s that?”) as a souvenir on Henri-Antoine’s jacket It takes him two days to get rid of it – “the blue outfit is sacred!».

The Washington Times runs a headline “the Blue Peril” highlighting the success of the “beloved Blue Devils”.

Charles is photographed for a recruitment poster for the US Marines : Devil’s Dogs and Blue Devils Together ! 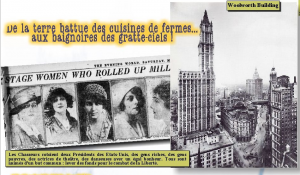 But today it’s something else. The Blue Devils are in the White House, with their flag, their bugles and their rifles. President Woodrow Wilson is coming to greet each and every one of them. On the presidential lawns, they’re enjoying a picnic served by the American Red Cross ambulance drivers…  they are playing at being ambassadors. In just a few days, the Liberty Loan has been honoured beyond all expectations. It is now a question of raising funds for an humanitarian organisation committed to the fighters in Europe. The Mountain Troops help them raise $100,000,000!

“Look out! ». Here comes the American president. He’s can’t take his eyes of them.

The Alpine Troops’ American adventure comes to an end on July 5 when the Rochambeau casts off for Bordeaux. The day before, the Blue Devils of France parade one last time on 5th Avenue for the big Independence Day parade.

They set off “Back Home”.

Most of them, like Charles, rejoin their units at the Front. Albert, and those wounded several times, are demobilized on their return. Henri Antoine François will not have the opportunity to tell his family about his incredible adventure: he dies in combat on 7 September 1918.

“We entertained them with the best

And now they’ve gone back to the trenches to rest

Those Devils, the Blue Devils of France »

– “The Blue Devils of France” by Irving Berlin

90 years later, in 2008, the Blue Devils are reunited with their American comrades: they fight together for four winters in the mountains of Eastern Afghanistan, in the province of Kapisa.

In Durham, NC,  there remains a particularly vivid memory of their long ago trip to the United States: Duke University adopts, in 1922, a Blue Devil as its mascot, in homage to the Blue Devils of France. 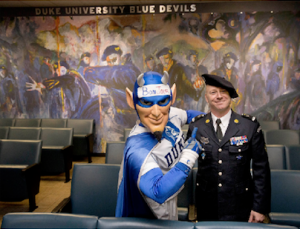