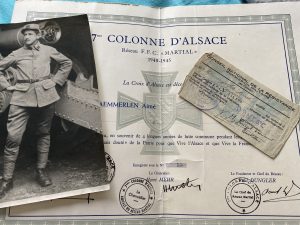 1914 – Thann. The First War has just begun. In Aimé, occupied Alsace, a young man of great stature, severe and always well-dressed, is about to flee his village to join the ranks of the French Army. He is to become a gunner.

This rocky spur is strategic for more than one reason.

First of all, it allows one to observe the Alsace plain and to control all movements taking place there. Since the beginning of the conflict, in 1914, it has been the “border” between France and occupied Alsace – still considered to be German territory.

In the summary trenches of “Old” Armand (the French name attributed at the end of the war to Hartmannswillerkopf), the soldiers of the 27th Battalion of Alpine Soldiers defend their positions. The Vosges forest is now full of shelters, pillboxes and trenches, with 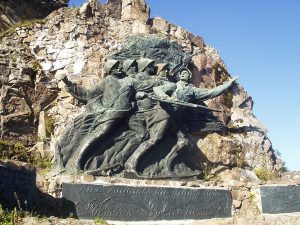 the German army, camping in trenches and concrete forts. A few hundred metres away, on the Sudelkopf ridge, Albert Roche – a young soldier of the 27th BCA – is getting ready to go into battle. He will become one of the best known heroes of the Great War.

The soldiers are exhausted. Death is everywhere.

The 27th BCA resists bravely. Its men are distinguished by their courage – alongside those of another Regiment which is soon to become the “First Regiment of France” and the symbol of Alsace: the 152nd RI (Infantry Regiment).

The Alpine Soldiers will earn the nickname of “Blue Devils” on these cold Alsatian foothills.

Meanwhile, Aimé is preparing to leave with his unit for an, as yet, unknown village called Verdun. But his mind is a little elsewhere… in Thann, where his family are still.

1945 – Mulhouse train station. Aimé has just been liberated from the Concentration Camp.

Hero of the First World War , resistant and deported, he disembarks from the train that brings him back from captivity. He wants to return to the Thann as soon as possible. In close company with his wife and three children, he is soon to mourn the death of one of his sons – Jean – who dies as a result of his war wounds. Jean and Aimé will be buried side by side in the small cemetery of St Amarin, not far from Sudelkopf. 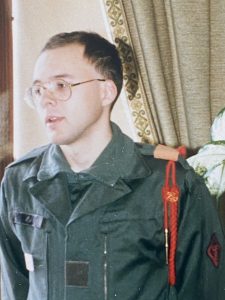 1986 – Old Armand Cemetery. The tradition of the 152nd requires that all the new conscripts walk from the Colmar garrison to the top of the Vieil Armand to receive their insignia. After their 35-kilometre march – mainly uphill – the soldiers are tired.

After a short rest, they gather at the graves to await the start of the ceremony as soon as the sun fades.

Night is here. Torches light up the military cemetery.

To the sound of the Marseillaise, the young soldiers of the 152nd RI – The Red Devils – lay flowers on the graves of their elders who died on this mountain. Not far off is the crypt, which goes down into the hill shelters, and where can be found the remains of nearly 12,000 soldiers, along with many objects found on the battlefield. 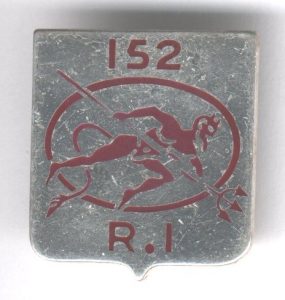 By the light of the fires, we can see the famous 152nd century crest. The Red Devil’s nickname was earned during the battle of Old Armand.

Blue Devils and Red Devils are forever united on this bloody hill. The 1640 graves all bear the names of deceased soldiers and the date of their death and regiment. Many white crosses bear either the 152nd RI or that of a battalion of mountain troops.

Before leaving, some soldiers go one last time to the crypt.

One of the young conscripts passes in front of the showcases where many weapons, uniforms, remnants of rations and various objects found in the trenches are displayed. Suddenly, he stops in front of a very old “mechanical” watch, placed between a revolver and an instruction manual.

It is now time to leave for Colmar.

It represents the Czechoslovak Army entering the city of Vladivostok in 1918. The artist – George Lurk – became famous by painting scenes intended to awaken the patriotic fibre of Americans.

A family visiting the famous LA museum for the first time stops in front of the painting.

After a few seconds spent in front of the painting, they continue their visit. Outside the weather is fine. California is their new destination. They left France a few months ago.

The ride will take them to Beverly Hills later. Between the various luxury boutiques, a small shop sells vintage watches. In the shop window, a MOTHER brand watch dated 1915 catches the attention of the father of the family. Its silver-grey dial has a strong patina. The white numerals have become cream. Despite looking oversized, the 33mm piece remains modest.

She reminds him of Hartmannswillerkopf.

1918 – New York. During the Liberty Bond Parade, Alpine soldiers from different battalions parade on 5th Avenue. The aim is to promote the war effort and try to convince the United States to join the conflict.

All of them obtained at least one citation and the majority of them were wounded in action. The lieutenant commanding them suffered several injuries. They wear their famous blue uniform and large black beret. American flags are hung in all the windows and the crowd is large.

Impressed by their bravery, some young Americans, who had joined the Legion or the French Forces, then returned home to contribute to the legend of the Blue Devils of France. They did their utmost to parade them on one of the most majestic avenues in the world.

Some of them went on to study at the famous Duke University, which baptized their mascot – and their basketball team: Blue Devil! 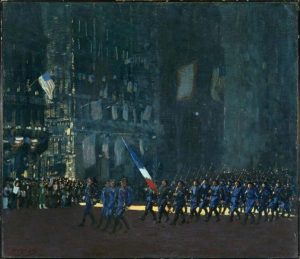 But back to New York.

On the sidewalk, George Lurk immortalizes the French parade. “Blue Devils on 5th Avenue” will become one of his most famous paintings. It can now be seen in Washington DC, in the Phillips Collection.

2020 – online. When I saw the Riskers watches for the first time, I felt very emotional.

These watches are more than just timepieces.

They pay homage to men (the courageous Albert Roche, the doctor guide and Alsatian, Pierre Muller, Guillaume d’Aboville, and the mountain troops) and causes (Pain without Borders, Children of the Mekong). They speak of those who took risks while remaining discreet.

Riskers are beautiful watches. I like the classic and original design that makes such a lasting impression.

But more importantly, they tell me a story that is partly my own.

Aimé was my grandfather.

He now lies in the cemetery of St Amarin, next to his wife and my parents.

I had the honor of marching in the Hartmannswillerkopf…

Life brought me to California – LACMA and Beverly Hills.

And – of course – I distinctly remember that military watch …. 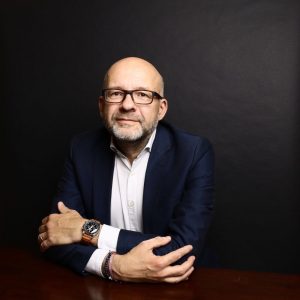